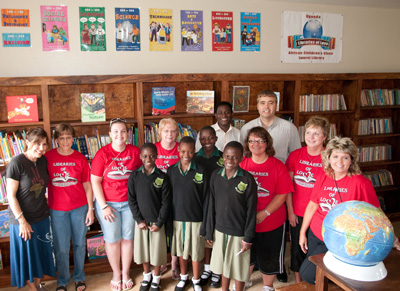 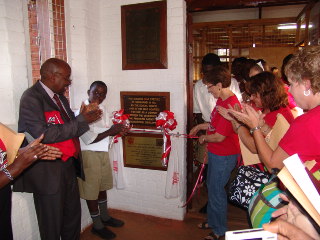 July 1, 2010 – The volunteer team from Illinois arrived at King’s College (a high school) around 10:00am. The school had planned the grand opening of the library at 4:00pm. In six hours, the team unpacked about 4,000 books, put them in Dewey order, shelved the books, hung maps and signage. They were ready for the opening right at 4:00! Read more on Trudy’s blog. 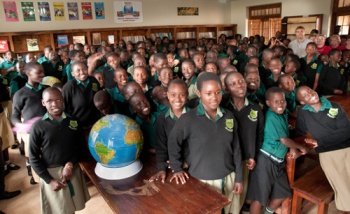 June 28, 2010 – Team 2 arrived from Illinois today, and by 9:30 this morning they were at work setting up the library at the brand new (since February) African Children’s Choir Music For Life primary school. This is where all touring choirs end up after returning from the U.S. or the United Kingdom, to finish primary school. All children have lost one or both parents. After graduating from MFL, they go to secondary schools in the area. These students have had the same 200 books for years now, so they will eagerly read their new books. The school houses and educates 150 children and was built over the last 3 years on Lake Victoria, in Entebbe, Uganda, south of Kampala.
(Photos courtesy of Lynne Dobson)

June 13, 2010 – Volunteers Direct Scott Porter wrote on his blog: “Friday all 3 of the libraries had been completed and we visited each school for the official openings. It is truly amazing to see the transformation of these rooms to completed libraries in just a few days.”